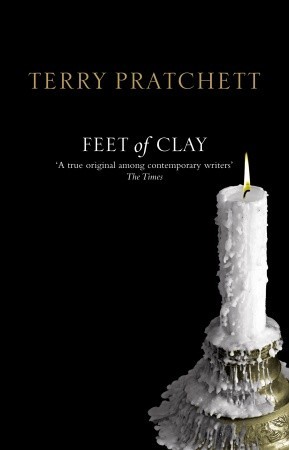 Right now, it’s the latter. There’s a werewolf with pre-lunar tension in the city, and a dwarf with attitude and a golem who’s begun to think for itself, but that’s just ordinary trouble. The real problem is more puzzling - people are being murdered, but there's no trace of anything alive having been at the crime scene.

So Vimes not only has to find out whodunit, but howdunit too. He's not even sure what they dun. But soon as he knows what the questions are, he's going to want some answers.

After reading the Discworld series in order the first time, I’m now enjoying a more serendipitous trip through some of the novels, and have arrived at this, the third Watch novel, in which Vimes is challenged by a secret rebellion, as well as some suspicious deaths in Ankh Morpork.

Like many Pratchett novels, there is a lot going on. This book seems to challenge any number of different issues - sexism, racism, monarchy, reproductive rights. And all that wrapped up in a compelling story and an engaging narrative that one several occasions had me thinking “just until the end of the chapter” at bedtime (before of course remembering that Pratchett does not typically write in chapters).

And of course it almost goes without saying that it’s funny. Pratchett manages to write some of the most amusing sentences, and make the most profound yet laugh-out-loud observations using his characters.

I’m consistently delighted by my return trips to the Discworld, and look forward to finding out which one is going to leap off the shelf and demand to be read next.