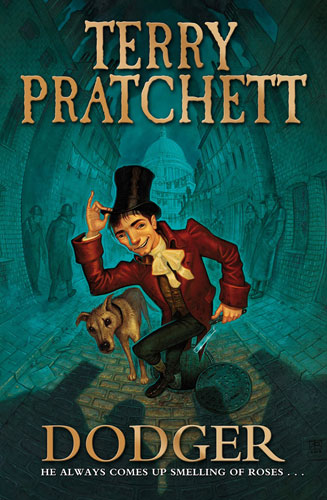 Dodger is a tosher - a sewer scavenger living in the squalor of Dickensian London.

But when he rescues a young girl from a beating, suddenly everybody wants to know him.

And Dodger's tale of skulduggery, dark plans and even darker deeds begins.

Dodger is an amazing stand-alone novel from Terry Pratchett, telling the tale of a young man in early-Victorian London whose life suddenly changes when he rescues a damsel in distress. It's an exciting and incredibly rich story that I have no doubt will appeal to readers of all ages.

The narrative is littered with characters based on real people from the period (Dickens plays a major part) and it imparts a lot of real historical information in a very subtle manner. I actually had to slow down my reading speed because I felt I was missing out on some of the texture, and often found myself jumping back a few paragraphs to read an especially good passage again.

Dodger himself is a great character who suits the setting and through whom the story comes across very well. He reminds me of several of Pratchett's Discworld regulars wrapped into one, and the only problem I had was that my mental image of him wanted to be younger than he was described.

There are a few colourful words in the text and some subtle innuendo that might have older readers tittering while passing over the heads of younger readers, but it's masterfully done and only adds to the book's appeal. One of the best books I've read for a long time.