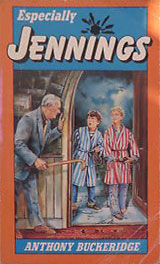 It was the little plastic badges given away with the cornflake packets that sparked off the idea of the Jennings Membership Club - a group whose founder (JCT Jennings himself) and Hon. Treasurer (CEJ Darbishire) were far from clear on what the club was for. This may have accounted for the poor results of the membership drive - only Binns and Botwell were prepared to subscribe, and they were the youngest boys in the school. But the Ground-to-Air Space-Gun (three tokens from the cornflakes packet) which could fire plastic missiles drastically changed the situation.

The fifteenth Jennings story sees the foundation of the Jennings Membership Club - along with a variety of other mishaps that leave Jennings and his friends in various quantities of trouble with the school staff. It’s one of the stories that I read as a child but not one with a plot that particularly well stuck in my memory, so it was a delight to re-read.

As usual, many of the problems of Jennings’ young life and initiated through not thinking about long-term consequences, poor communication, or just unfortunate misunderstandings. The book portrays a delightful world of a boarding school from history, that is perhaps only half close to reality.

Some of the storylines do seem very familiar - the sort of thing that might have happened at my own school (vastly less posh that Linbury Court though it was) - and I’ve always enjoyed how this makes the antics of Jennings and Co very believable despite some of the more outlandish repercussions.