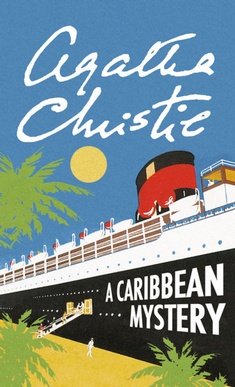 An exotic holiday for Miss Marple is ruined when a retired major is killed...

As Jane Marple sat basking in the Caribbean sunshine she felt mildly discontented with life. Eventually, her interest was aroused by an old soldier's yarn about a strange coincidence. Infuriatingly, just as he was about to show her an astonishing photograph, the Major's attention wandered. He never finished the story!

A fairly tame Marple novel, although with a refreshing change of scenery. Gone are the quiet villages and large family mansions of previous novels, and in is a row of bungalows on a Barbados beach.

The story though lacks any real sense of intrigue. All the characters have hidden secrets - none are quiet who they seem, and all of them are after something. It's almost like too much effort has gone into providing red herrings.

In part, my dislike may have been caused by reading most of it in two sittings, whilst on a train. Perhaps taking it in smaller chunks may have allowed me to digest it better and to form interim conclusions about who the murderer could be.

As it is, I'm not convinced the clues were there, and this just seemed like a failed attempt to branch out into a new location, and hope to sell on that.