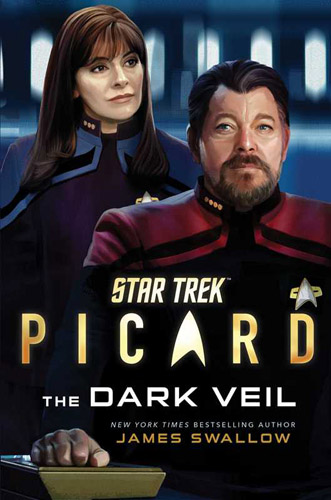 Within the United Federation of Planets, a terrorist strike on the shipyards of Mars has led to the shutdown of all relief efforts for millions of Romulans facing certain doom from an impending super­nova. But when the USS Titan is drawn into a catastrophic incident on the Romulan-Federation border, Captain William Riker, his family, and his crew find themselves caught between the shocking secrets of an enigmatic alien species and the deadly agenda of a ruthless Tal Shiar operative.

The second tie-in novel for Star Trek Picard is again a prequel story set some years before the events depicted in the television series (though after the events seen in The Next Generation series and movies). This time the action takes place on the USS Titan, featuring William Riker and Deanna Troi, and tells the story of an encounter with a new species, and some Romulans.

It is worth noting that although this story occurs before the TV series, it would best be read after watching season one, as there are elements which could be considered spoilers.

It’s a great book, along the lines of a classic Trek novel, mixing ongoing galactic politics with an adventure of the week, filled with familiar and new characters. I’m really pleased with how Swallow has blended the new canon of the Star Trek Picard TV series with the alternative world of the USS Titan that has been presented in the novel series, so that it feels comfortable for those readers who are fans of both.