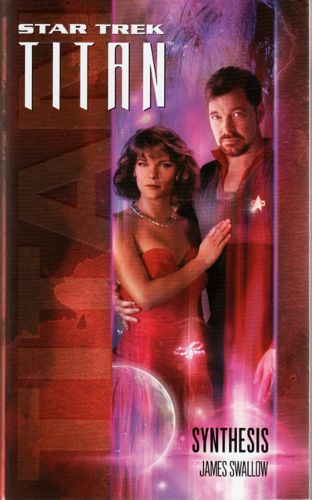 Captain Will Riker and the crew of the USS Titan make contact with a civilization made up entirely of artificial intelligences - sentient computers who have surrounded a vast gas-giant planet for eons, serving as the first line of defence against an ominous threat that the Titan crew can scarcely comprehend. The long and turbulent history of the AIs has made them deeply distrustful of organics, and their mistrust leads to an unexpected act which radically transforms the dynamic between the ship and her crew.

Synthesis is an interesting Star Trek novel in several ways. It's main topic is very Trek, focussing on the definition of life itself, and complicated ethical questions surrounding the answer. However the story gets too caught up in the mystery and the action and seems to lose focus on the part of the storyline that should have been explored.

The central ideas are nothing new: a race of sentient machines; a war whose cause nobody remembers; political disagreement and the emergence of sentience in a starship computer. When I first realised the last of these points my thought was along the lines of 'oh no not again,' despite my love of Swallow's previous trek novel in the Terok Nor trilogy. This idea has been done to death, most recently in the New Frontier series, which explores many of the same gags and conundrums. If this book had explored some more of the ethics, made this part of the plot deeper, then it would have been an interesting read in the true spirit of science fiction. Instead though it is glossed over in favour of the war storyline, and tiny glimpses into the personal lives of the other characters.

This seems to be much more of an ensemble piece than recent Titan novels, which focussed on developing particular characters and I felt that detracted from the experience and ended up with too much focus on the aliens.

Overall, yes I was a little disappointed. While it does work as a story it doesn't seem to move the characters on at all, just dropping them back into the toy box at the end of the day. I had expected something more based on Swallow's previous work, but would still not dismiss this as un-entertaining.