To Lose The Earth 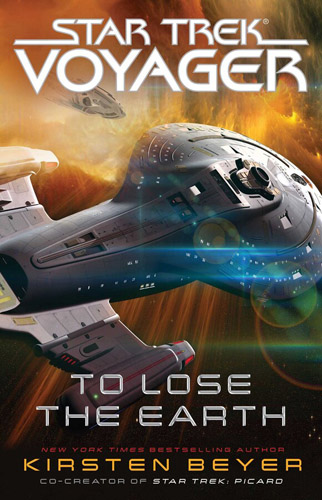 As the crew of the Full Circle fleet works to determine the fate of their lost ship, the Galen, a struggle for survival begins at the far edge of the galaxy. New revelations about Species 001, the race that built the biodomes that first drew the fleet to investigate planet DK-1116, force Admiral Kathryn Janeway to risk everything to learn the truth.

Kirsten Beyer’s final Star Trek: Voyager novel wraps up what has been an epic literary adventure over the past twelve years, as the crew take a more intentional second trip to explore the Delta Quadrant.

This feels very much like part two of a single story with a large gap, with all the events following on from things that happened in the previous novel. Given I read the last novel over two and a half years ago (due to the author’s “distraction” working on some TV series), I struggled to remember some of the details.

Like many of Beyer’s novels, there is a strong theme of family, and in particular here one of communication, that’s reflected in many of the plot threads for different characters and at different scales. Beyer hits the right Star Trek notes in producing an episode that tells an entertaining story while also providing a moral lesson.

In terms of the plot, while there are many aspects, the most prominent of the TV characters is Harry Kim, and he’s the star of about 45% of this novel, with another 45% given to one of the novel-series-original characters, and the remainder spread amongst both the old and the new. For a finale, I felt that there was perhaps too little for some of the older familiar characters, but that might be me reading it in the context of a long separation rather than considering the whole ten-book drama.

The end felt a little abrupt, but that might be because my reading speed increased - though there are details that have already faded from my memory after only a couple of days. But it definitely felt like a decent and optimistic endpoint, leaving the door ajar for more maybe one day - once the author stops adding to canon in potentially contradictory ways with her increasingly prominent TV writing career.