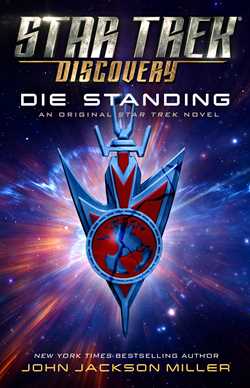 No one in the history of histories has lost more than Philippa Georgiou, ruler of the Terran Empire. Forced to take refuge in the Federation’s universe, she bides her time until Section 31, a rogue spy force within Starfleet, offers her a chance to work as their agent. She has no intention of serving under anyone else, of course; her only interest is escape.

The latest Star Trek: Discovery tie-in novel is set between seasons one and two of the TV series, though probably is best read after season two because it deals with some characters who hadn’t previously appeared in the series. The novel follows Philippa Georgiou as she is drawn into an investigation into an attack on a starship that bears a striking resemblance to other events in her earlier life.

I find the approach that’s been taken with the Discovery novels - to find ways of fitting their stories around the TV series while trying to avoid being contradicted by later stories - to lead to some really interesting ideas. This is one - sat as a snug side story and yet still compelling and focussing really deeply on one character.

The plot didn’t do a lot for me - the beginning felt a bit forgettable, then the rest of the story quite episodic. I think in part the focus on a character that I don’t particularly like didn’t make for the most engaging read, but obviously this is a character that’s been designed to be unlikable, although this was balanced by some classic villainous campery. However the supporting characters - two in particular - were probably what stuck with me the most after reading - both are to varying extents minor characters from the canon, and my head had an unfortunately tendency to stick the wrong face on one.

Overall, I think an average Trek novel, with probably a bit more in common with some of the classic novels than some of the more recent entries, which is not a bad thing.