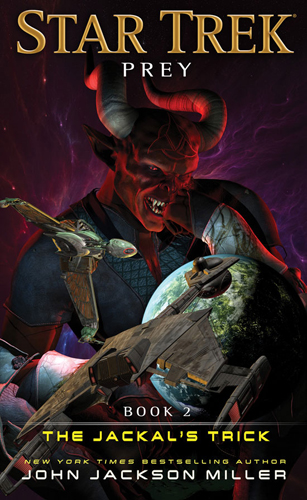 The Klingon-Federation alliance is in peril as never before. Lord Korgh has seized control of the House of Kruge, executing a plot one hundred years in the making. The Klingon cult known as the Unsung rampages across the stars, striking from the shadows in their cloaked Birds-of-Prey. And the mysterious figure known as Buxtus Cross launches a scheme that will transform the Klingon Empire forever.

The second book in John Jackson Miller's Star Trek trilogy, part of the series' 50th anniversary celebration, continues the tale of a Klingon warrior who has surprisingly risen to prominence, as well as several of his compatriots - and the cast of The Next Generation who are once again stuck in a diplomatic struggle rather than out exploring.

As is typical for Star Trek, there are some surprisingly relevant allusions to occurrences in our world, whether intended or not, which makes the reader long even more to find out how things are going to go and how at least one of the worlds they love will end up all right. I did detect a tiny feeling of repetition though, with some novels earlier in the continuity following a plot line with some similarities.

Unlike many trilogies, this middle book doesn't have the feeling of just shuffling things between the end of the beginning book and the start of the concluding book, but instead tells a full story in itself that features a lot of action and a satisfying resolution. There's a lot going on, of course, and many threads still hanging for book three but it certainly stands well alone.

A great Trek novel in a great Trek trilogy. So far my favourite trilogy of the year.