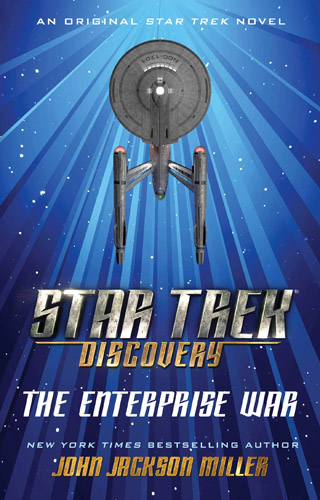 Hearing of the outbreak of hostilities between the United Federation of Planets and the Klingon Empire, Captain Christopher Pike attempts to bring the USS Enterprise home to join in the fight. But in the hellish nebula known as the Pergamum, the stalwart commander instead finds an epic battle of his own, pitting ancient enemies against one another—with not just the Enterprise, but her crew as the spoils of war.

The Discovery tie-in novels seem to be coming at a good pace now - and remain well crafted to serve as prequels and tell stories that are less likely to be contradicted by future TV (although one of them has suffered this fate a little). This time it’s the chance to find out what the Enterprise was up to during Discovery’s first season - it’s probably a spoiler, so best to watch to the end of Season Two before reading this if such things matter to you.

This feels like quite an epic - the story takes place over the course of a year or more - and that give plenty of time for several major events to occur, and for us as readers to get to know several of the main characters in more depth. It follows multiple threads of narrative, weaved together well, and explores some of the frustrations of a deep space mission as well as a variety of perilous scenarios.

I particularly enjoyed spending some time inside the head of Captain Pike, who has felt an underused character in the past, and is only now coming into his prime - and seeing things from his perspective in novel format really adds another layer of depth to his character.

A good prequel, and I hope they keep coming.