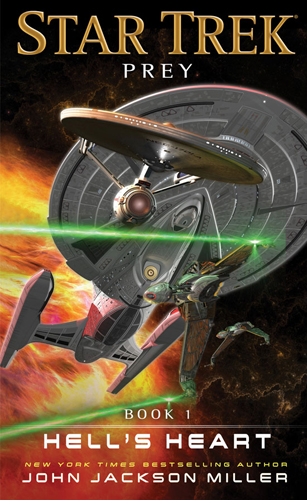 When Klingon commander Kruge died in combat against James T Kirk on the Genesis planet back in 2285, he left behind a powerful house in disarray - and a series of ticking time bombs. Now, one hundred years later Captain Jean-Luc Picard and the crew of the USS Enterprise are snared in the aged Korgh's trap - and thrust directly in the middle of an ancient conflict.

This is the first book in a new trilogy - the second celebrating the 50th anniversary of Star Trek - focussing on The Next Generation crew and being a part of the continuing adventures told in the novel series. Picard and the crew are dispatched on a diplomatic mission to deliver a Klingon house to a celebration of an old battle, but as usual complications arise.

Despite the main storyline following TNG there is a pretty chunky Original Series act in the story with some star turns by Kirk and Spock, which serves to give some background and set up events in the later era.

It's a great story that uses a bunch of familiar characters really well and sets this up to be an excellent trilogy. The plot is deliciously complex pulling on strings from throughout the Trek canon and unwinding them in new and interesting ways. The new characters are rich and compelling and draw the reader in to their intrigue.

An excellent tribute to the series, and one that leaves me desperate to continue the story with book two.