The Secret of the Lost Tunnel 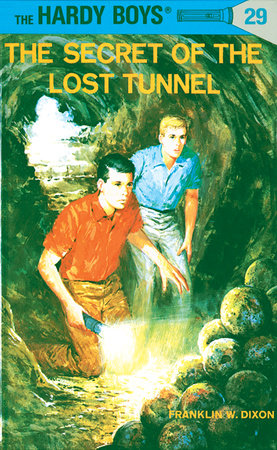 Difficult assignments are nothing new to the Hardy boys and this one that takes them to the Deep South is particularly challenging. Their mission: to vindicate a long-dead Confederate general, disgraced during the Civil War because he was accused of stealing hidden gold belonging to a bank. Skillfully avoiding booby traps and flying bullets, the boys persevere in their perilous quest.

The 29th Hardy Boys novel feels firmly in the ‘The Hardys go on holiday for a mystery’ era, as I’m naming it. This time it’s off to an archaeological dig to find some treasure from the era of the American civil war.

I’m not surprised really that this book didn’t make much of an appearance during my childhood, as it has some well-dated references and terminology to refer to race, and while not the most racist thing I’ve ever read did feel uncomfortable, particularly in a children’s book.

The story was fairly bland, and felt disjointed and unreal. There was a bit too much violence, coincidence, and unbelievable freedom for two teenagers. It doesn’t really fit with my mental model of what a Hardy Boys adventure should be.