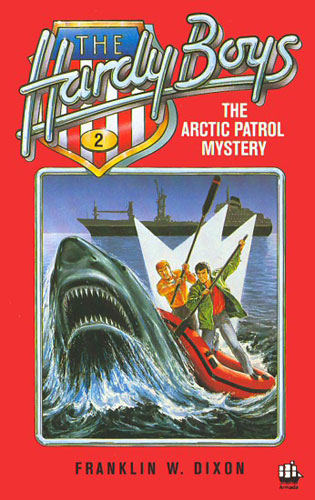 Sent to Iceland to trace a missing man, the boys believe their mission to be routine. But when an American astronaut mysteriously disappears, they're caught up in something far more dangerous.

It’s the end of the 1960s for the Hardy Boys and this cements the idea that the series has taken a change in direction - as the space age is upon them, as well as the age of proper international air travel.

The level of peril is again heightened as the detective brothers travel to Iceland to help their father with a couple of very secret cases. This is probably the best version of the Hardy’s go on holiday trope so far - the author takes a lot of effort to depict Iceland with realism.

The dated elements of previous novels have been much toned down. There is a slightly expanded role for some of the female characters, and they are finally described explicitly rather than euphemistically as the boys girlfriends, and the treatment of the people of Iceland is respectful. Obviously it is still a fifty year old work and so aspects still feel old fashioned, but less so.

A good adventure, and it seems clear why the UK publishers would have chosen to release it early as book two in their numbering system.