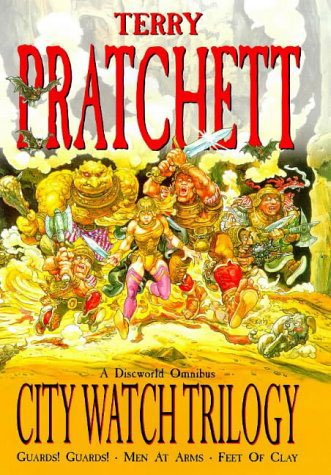 Insurrection is in the air in Ankh-Morpork. The Haves and Have-Nots are about to fall out all over again. Captain Sam Vimes of the city's ramshackle Night Watch is used to this. It's enough to drive a man to drink. Well, to drink more. But this time, something is different - the Have-Nots have found the key to a dormant, lethal weapon that even they don't fully understand, and they’re about to unleash a campaign of terror on the city. Time for Captain Vimes to sober up.

The first of the City Watch stories in Terry Pratchett's Discworld series introduces readers to Ankh-Morpork's police force led by Captain Vimes. This is the first time that I've re-read a Discworld novel, and so I wasn’t sure how I'd feel. My memories of the early Watch stories are patchy, mainly because of when in my life I first read them, so I couldn't remember in any great detail what was going to happen.

The plot focusses on an obscure cult that's arisen in the city, with a number of motivations, who are plotting to overthrow the Patrician with a fairly complex plan that relies on tradition, magic and a fair amount of obfuscation. Meanwhile Carrot, a human raised by dwarves, has arrived in the city to join what he thinks of as the honourable profession of watchman.

As with all Discworld novels, it's full of cultural references and humorous moments that poke fun, but it definitively has the feeling of one of the earlier Discworld novels - a lot of the lore that later books rely on has yet to be in place, and some of the characterisations don't quite match with what we see in the later watch novels. The humour relies a lot on a satirical approach to the genre rather than being in the storytelling, and feels much more likely to elicit a knowing nod than a laugh out loud.

I enjoyed re-reading this and certainly expect to remember more of the plot in another ten years than I did this time, but I suspect I will enjoy the later Watch novels more when I return to re-read those.