I Shall Wear Midnight 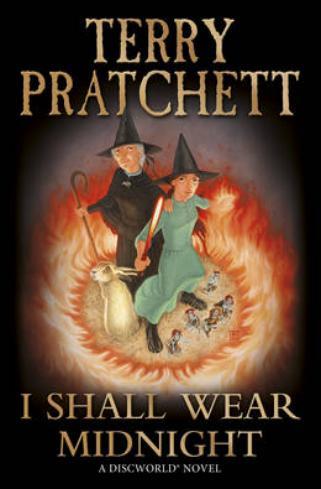 It's not easy being a witch, and it's certainly not all whizzing about on broomsticks, but Tiffany Aching - teen witch - is doing her best. Until something evil wakes up, something that stirs up all the old stories about nasty old witches, so that just wearing a pointy hat suddenly seems a very bad idea. Worse still, this evil ghost from the past is hunting down one witch in particular. He's hunting for Tiffany.

Terry Pratchett's latest Discworld novel for 'younger readers' lives up to his usual high standards. Tiffany Aching is now 16 and technically a fully qualified witch who has returned to her steading on the chalk. Unfortunately, something much wore than she has dealt with before is chasing her, and she's also lost her boyfriend.

This book serves to round off Tiffany's coming of age. It draws a fair amount on the events of the previous two novels and to a point the plot is fairly similar. Not too similar though, and in fact, what is nominally the main plot is just a vehicle for the rest of the story.

The plot does seem quite slow to get going, but from around halfway it picks up the pace and switches into unputdownable mode. A number of familiar characters make cameo appearances, including one who has not been seen for some time, and there are a few tantalising hints about where the next Discworld novel might be going.

In all, another excellent tale that gives Tiffany a nice send off. I do fear a little though that it means this is the last of the witches stories, as the so-called 'adult' series has recently been a lot more Ankh-Morpork focussed.