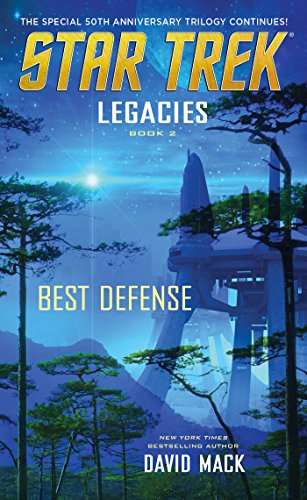 One brave woman ventures alone into a parallel universe to save her old shipmates, exiled there decades earlier by a mysterious device called the Transfer Key. A long-awaited Klingon-Federation peace conference convenes, led by Ambassador Sarek of Vulcan and Councillor Gorkon of Qo'noS. But both sides have enemies who would prefer the two great powers remain at war - and who will do anything to make certain hate wins the day. Captain Kirk and his crew seek the stolen Transfer Key that opens a door between universes, but their hunt is cut short by Ambassador Sarek's plea for help.

The second book in this trilogy celebrating the fiftieth anniversary of Star Trek, follows, at least in part, on from the end of the first book, dealing with the aftermath of that book's final revelation and Number One's mission into the unknown.

To me, the more interesting part of this story was a major subplot about a peace conference between the Federation and the Klingons, that gave an opportunity to bring back some more favourite characters and to introduce some fascinating new ones who add a different dynamic to some of the storytelling.

I'm not a massive Original Series junkie, and don't tend to read the novels set in that era most of the time. While I did enjoy this book, I found it tough to get into for the first half, and would read a chapter or three before needing a break, but as the plot picked up I found I was more and more drawn in.

There were a few great segments spent with some of the lesser characters and I think I liked those more than the parts with the most central of the characters. Will certainly be picking up the final part of the trilogy, but then I'll probably not revisit TOS until the next major anniversary.