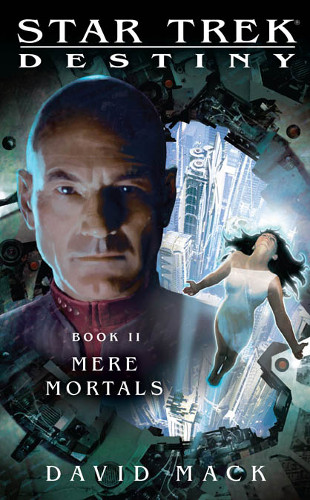 The Borg have found a secret passage through subspace and are using it to attack the Federation. But the passage is only one of many that the Enterprise crew have discovered inside a nebula. Working together, Captains Picard and Dax must find the right one before they can lead a counterstrike to stop the Borg invasion.

The action has focused more on two of the four crews that featured in the first novel, and on one character in particular, and starts to join together the different plotlines into one.

I don't have a lot to say about this novel - it was good, kept up the pace and kept me attached. The mixture of flashback and present day scenes was well done, each in turn revealling just the right amount to keep the reader interested.

My only criticism of the series so far is its' fleeting use of the starship Voyager in both novels, which seems to be there just as a tip of the hat. There's plenty of oportunity for some emotional focus on those characters here but they only appear for a couple of scenes - hardly enough to warrent their inclusion - unless it's building up to something bigger int he finale.