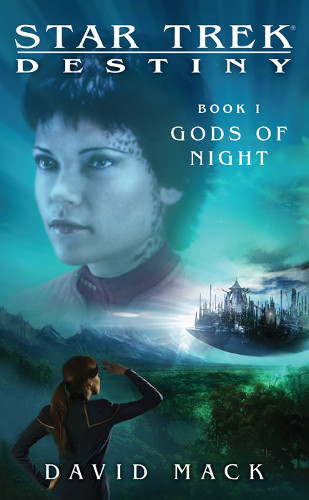 The Borg return -- with a vengeance! Blitzkreig attacks by the single-minded aliens with their hive mentality and their mission to assimilate every intelligent being they encounter are leaving whole worlds aflame.

An excellent start to this series, quite unexpectedly. I don't remember being too enamoured about David Mack's DS9 continuation novel, Warpath, and I wasn't looking forward to more novels focussing on the borg - to be honest, they've been done to death in Voyager.

But this was different. The Borg, while being the enemy, aren't the main focus of this volume - they are a threat but they are very much in the background, popping up every now and then. I suppose in part that is because Mack has deftly intertwined the tales of four separate starships and crews, and only one has been directly interacting with the borg.

One psuedo-criticism is the absence of any explanation of how Dax has got from DS9 (where we left her in the most recent DS9 novel) to captaining the Aventine - but I suppose a gap is reasonable given that the novel timeline for DS9 has moved fairly slowly since the series ended. Also, this leaves plenty of freedom for the DS9 authors to write what they want to while they catch up.

A major issue I had was with the time dilation effect, which I thought the author had got completely wrong. However, having looked it up on the internet, and done the calculations myself, it seems that while non-intuitive, it is correct. This is why I've given an apologetic extra half star to make it up to five.

In conclusion, some parts were a little predictable, but then I suppose that if everything that happened was unexpected, one would have cause to doubt the logic of the storyline. So it's a good start, and I hope it can only get better!