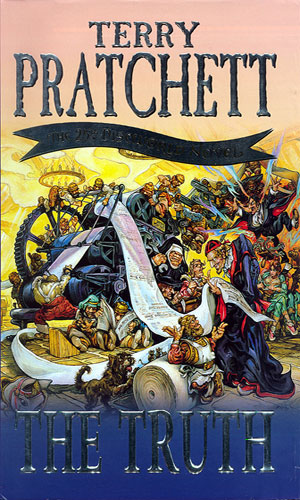 The truth will out, or at least it's going to try to, any minute. New printing technology means that words just won't obediently stay nailed down like usual. They can now be taken apart and used to make other words. Which is downright dangerous. There's a very real threat of news getting out there. Of people finding out what's really going on. And the powers that be aren't happy - they want that to be far from the truth. If they are to call a halt to this madness of free speech, they may have to succumb to their despotic tendencies. But will they, in this brave new world, still be able to have the last word?

My first read through of the Discworld series was in strict publication order. Now that I’m revisiting them I’m just dipping in wherever I’m inspired, and this time I picked up The Truth after hearing Brandon Sanderson (another of my favourite authors) talking about it on a podcast.

The Truth is the tale of William de Worde, a young Lordling who has moved to the city after falling out with his father, who makes a living by writing letters to update other country gentry about what’s happening in town. That is, until a printing press forces its way into his life and he becomes the Disc’s first newspaper editor.

This to me is Pratchett’s peak era - the comedy and the parody are rich, deep and constant, and he continues to make references to the real world, while also providing a compelling and complete story. It’s entertaining on so many layers and draws the reader to keep on consuming.

Absolutely fantastic to revisit, and I’m glad I did.