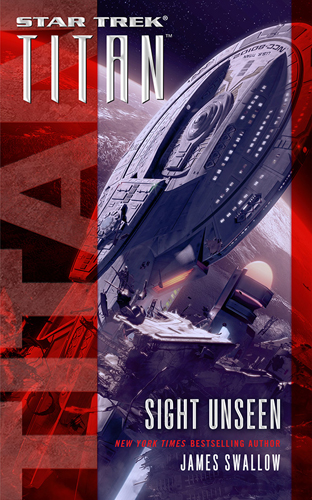 On orders from Starfleet, Titan sets out toward the edge of Federation space to tackle its latest assignment: to work with an alien species known as the Dinac, who are taking their first steps into the galaxy at large as a newly warp-capable civilization. But when disaster befalls the Dinac, the Titan crew discovers they have unknowingly drawn the attention of a deadly, merciless enemy - a nightmare from Riker's past lurking in the darkness.

The latest novel in the Titan series follows the crew of the starship and Admiral Riker as he continues to get used to his new role. Dispatched to a new frontier, the crew receives a distress call from a friendly vessel and heads off to help.

The book starts like many Trek novels and also follows the recent convention of telling sequels to episodes of the TV series. The first half moves along at a reasonable pace but feels like it's lacking something and didn't grip me as much as I had hoped. There were moments where I phased out and had to take a step back a page to catch back up with myself.

The second half though was excellent. The pace ups and we get a strong blend of action, intrigue and a range of characters having interesting moments. I really like how Swallow takes some of the newer characters and gross them through the novel to the point where it feels like you've known them forever - a trick that would be beneficial to some of the other recent Trek tie-in novels.

That said, some of the other characters that we've been exposed to for a while seemed to get much less attention and two of the subplots felt shoehorned awkwardly in to reshuffle things in a way that didn't have much bearing on the plot of this book.

Overall though the second half really impressed and entertained me, and it was definitely worth reading the first half to get there. An excellent adventure and well used characters. I hope for many more books by Swallow in the years to come.