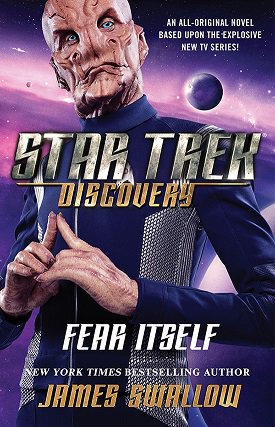 Lieutenant Saru is a Kelpien, a member of a prey species born on a world overrun by monstrous predators, and a being who very intimately understands the nature of fear. Challenged on all sides, he is determined to surpass his origins and succeed as a Starfleet officer aboard the USS Shenzhou. But when Saru breaks protocol in order to prove himself to his crewmates, what begins as a vital rescue mission to save a vessel in distress soon escalates out of control. Forced into a command role he may not be ready for, Saru is caught between his duty and the conflicting agendas of two antagonistic alien races. To survive, he will need to seek a path of peace against all odds, and risk compromising the very ideals he has sworn to uphold.

The third novel set in the time of Star Trek: Discovery, the latest television series in the Trek universe. In this story James Swallow writes about Saru during his time serving on the USS Shenzhou patrolling the Tholian border.

It’s a fascinating exploration of Saru’s character that takes what we’ve learned about him in the TV programme and expands upon it - showing a step in his journey towards what the events of the show force him to become.

The plot feels like a fairly standard Star Trek novel, which of it had featured any other series’ characters might have been a little mundane. The addition of the Discovery characters though gives it the extra dimension it needs to tell an engaging story that makes the reader believe in and understand the characters in more depth.

Another enjoyable Disco novel. I hope that there are more on the way, perhaps continuing the trend of exploring a different character each time.