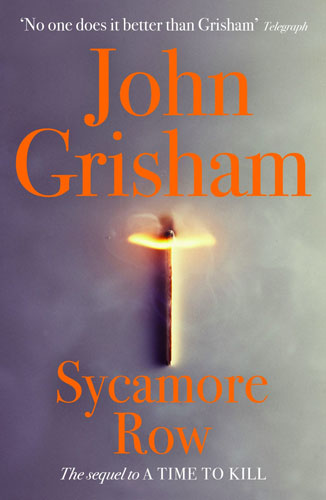 Jake Brigance has never met Seth Hubbard, or even heard of him, until the old man's suicide note names him attorney for his estate. The will is dynamite. Seth has left ninety per cent of his vast, secret fortune to his housemaid. The vultures are circling even before the body is cold: the only subject more incendiary than money in Ford County is race, and this case has both.

Marketed as the sequel to Grisham's first novel 'A Time to Kill', Sycamore Row joins the same lawyer from the earlier book three years later. Beyond the reappearance of the same characters and some themes though the plot is entirely distinct and could easily have been told about another young lawyer in a southern town in the late 1980s.

The main issue with this story to me is that it's the 1980s and about racism. It feels like this is a subject that Grisham has now covered as nauseum - perhaps I'm not meant to have read his entire output, but it feels like he's covering the same ground again. The 1980s also feel far to recent to me, admittedly a British reader born in that decade, and I find it hard to believe the racism presented was really still around at that point (although from recent news coverage perhaps it still is). In my head, the setting kept getting pushed back 20 years to the sixties, which felt a more natural fit for the story, regardless of what the actual situation may have been.

It was good however to get another courtroom-based drama from Grisham, as that tends to be where he's at his best. The structure was good and brings the plot along well, and the book doesn't suffer from some of the tropes that have appeared in several of the author's earlier works. Despite the realism, there is one aspect of the conclusion that I found irritating and unsatisfying, but I'm nervous of mentioning it specifically for fear of it being deemed a spoiler.

Generally enjoyable, and nice to be able to relax with a solid courtroom drama that I could digest at a nice pace. I've now read all Grisham's output to date and can look forward to reading the next book on release.