The House on the Cliff 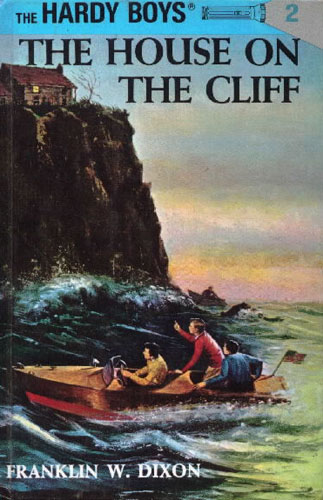 When Mr. Hardy disappears while investigating a mystery surrounding a vacant house rumoured to be either haunted or an abode for criminals, the Hardy Boys search for the truth.

The second book of the original Hardy Boys series feels much more of an adventure than the first. Called in to help out on a case by their father, the two teen detectives set out to investigate a local smuggler.

My copy is the classic-style reissue of the re-written 1950s version, and reminds me quite strongly of an adventure that Enid Blyton might have given the Famous Five, with smugglers, tunnels, deserted houses and boats playing large parts. There are flashes of violence that Blyton would have avoided, but nothing that would surprise or outrage a modern-day reader.

This book brings in many of the classic Hardy a boys elements, and they feel much more involved in the plot - though there remain a number of coincidences that add up to an adventure rather than any real sleuthing. Overall though I thought it was a stronger novel and it was really enjoyable to read my first 'new' Hardy Boys adventure in twenty years.