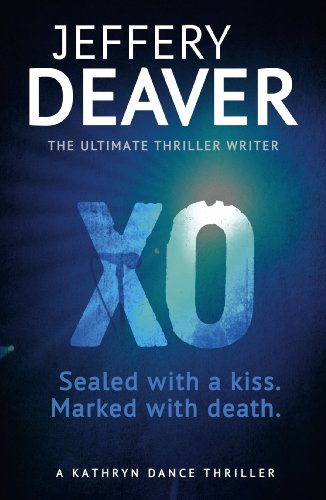 Kayleigh Towne is a beautiful and successful singer-songwriter, and Edwin Sharp is her biggest fan. When she replies to one of his fan letters with 'XO', Edwin is convinced she loves him, and that her latest hit song 'Your Shadow' was written for him. Nothing Kayleigh or her lawyers can say persuades him otherwise.

Then the singer gets an anonymous phone call; it's the first verse of 'Your Shadow' playing. Soon after, one of the crew is horribly murdered. Kayleigh's friend Kathryn Dance, a special agent with the California Bureau of Investigation, knows that stalking crimes are not one-off occurrences, and, sure enough, more verses of the song are played as warnings of death to follow.

This is the fourth Jeffrey Deaver novel I've read, and is the third in his Kathryn Dance series, about a California Bureau of Investigation agent with a speciality in reading body language. I was quite dubious going in, and held off buying the book for a long time after publication, as I wasn't a particular fan of the earlier novels in the series.

I'm pleased to say that the things that niggled me about the previous novels seem to have been improved. The characters are generally more rounded, I'm able to suspend my disbelief without problem, the narration is much smoother and less (though not fully) impartial, and everything adds to the plot.

I was particularly impressed by Deaver's ability to create the universe of the story, with a focus on folk music, that includes writing an entire albums-worth of song lyrics that are presented as an appendix. Having that available throughout actually helped me engage with the story and made the world feel much more authentic.

I was frustrated though by what seems to be Deaver's thing of continual twists to the point of irritation, particularly in the latter half of the book - I don't think it's a spoiler to say that every time you think something's been wrapped up nicely then he throws in a new spanner. I just found it a little absurd how many times this can happen, and it leaves me with less and less faith each time that at the very end they got anything right.

Overall though, I enjoyed reading this much more than I expected, and hope that Deaver is able to extend the Kathryn Dance series further - I certainly won't be as reticent about picking up the next book.