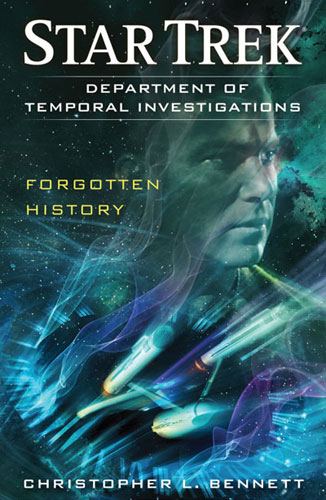 The agents of the Department of Temporal Investigations are assigned to look into an anomaly that has appeared deep in Federation territory. It's difficult to get clear readings, but a mysterious inactive vessel lies at the heart of the anomaly, one outfitted with some sort of temporal drive disrupting space-time and subspace. To the agents' shock, the ship bears a striking resemblance to a Constitution-class starship, and its warp signature matches that of the original Federation starship Enterprise.

Forgotten History is the second book in Christopher L Bennett's Star Trek: Department of Temporal Investigations series, and is very similar to the first.

The plot, framed by scenes set in the post-TNG-era 'present' but mostly occurring during the original series up to the period between the first and second films, sees the appearance of a rift in time and space containing an unusual starship, which sends Lucsley, Dulmer, and the rest of the DTI delving into their organisation's past.

Something I've realised for the first time is that Bennett's writing style is a little unusual. His writing is very much about telling the reader what is happening, whereas most novels I read spend a lot of words on description and fewer directly on events. Personally, I have no problem with this - I don't have a powerful visual imagination and when I read I don't find myself picturing events in my head. However other readers may find this disconcerting if they are used to an author painting a picture for them.

Partly, this goes with the nature of the story, which is framed in parts as if it is being recounted by one character to the others, however this doesn't seem to quite work, as some of the events depicted are ones that the character in question would not have been privy to.

Bennett's chief talent is in the detail. Once again he has managed to pull together elements from a vast range of episodes, predominantly of the original series, and other novels, into a consistent storyline. This makes the story incredibly rewarding for the fan, although for those not so deeply immersed in Trek lore might come as something of a turn-off. I'll admit that some of the references, particularly those to Bennett's own earlier novel 'Ex Machina', will have passed me by as I've not read it.

I enjoyed reading this book, despite its complexity and lack of visuals, but I think it probably is one of those that readers will either love or hate.