The Eye of Zoltar 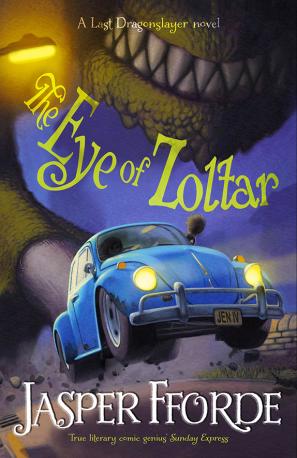 The Mighty Shandar, the most powerful wizard the world has ever seen, returns to the Ununited Kingdoms. Clearly, he didn't solve the Dragon Problem, and must hand over his fee: eighteen dray-weights of gold.

But the Mighty Shandar doesn't do refunds, and vows to eliminate the dragons once and for all - unless sixteen-year-old Jennifer Strange and her sidekicks from the Kazam house of enchantment can bring him the legendary jewel, The Eye of Zoltar.

The third and now penultimate book in The Last Dragonslayer series sees the return of Shandar - the greatest wizard that ever lived - which triggers Jenny and a ragtag collection of companions to head off on what is definitely not a quest if anyone's asking.

It's a fun fantasy adventure, with Fforde's usual eye for detail and sense of humour, references flying everywhere, many of which I probably missed on my first reading. It's longer than either of the first two books, but didn't feel overly so - the plot moves rapidly and it keeps the reader's attention throughout.

The book lacks an emotional core though - the peril doesn't feel real (perhaps because of the light-hearted fantasy tone) and the characters' responses generally seem too relaxed. One character I found particularly interesting grew a lot in the book, but rather than being something gradual and building it seemed to come as a rapid shift which I felt detracted from the setup.

While the conclusion is well executed, it didn't feel like a satisfactory resolution and left me frustrated that I couldn't turn the page again, rather than in the desired state of anticipation for the next book. Still very enjoyable, but not quite at the top of Fforde's output.