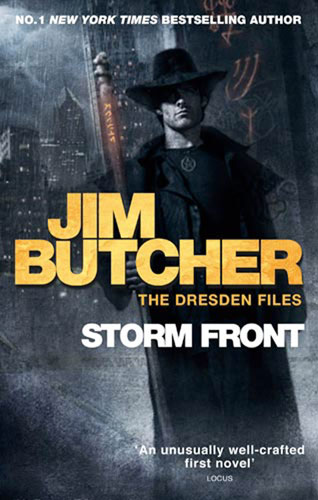 Meet Harry Dresden, Chicago's first (and only) Wizard P.I. Turns out the 'everyday' world is full of strange and magical things - and most of them don't play well with humans. That's where Harry comes in.

Harry is the best at what he does - and not just because he's the only one who does it. So when the Chicago P.D. has a case that transcends mortal capabilities, they look to him for answers. There's just one problem. Business, to put it mildly, stinks.

So when the police bring him in to consult on a grisly double murder committed with black magic, Harry's seeing dollar signs. But where there's black magic, there's a black mage behind it. And now that mage knows Harry's name. And that's when things start to get interesting.

Storm Front is the first book of the Dresden Files, about a wizard turned investigator in Chicago. The narrative is presented in the first person, and while the text feels a little rough at the edges it's a good first novel with a fair amount of promise.

The main character is an interesting chap with unsubtle hints of a troubled past that's clearly being set up for later exploration. The others though seem rather superficial and at least one seems to lack motivation for her actions.

Plotwise, I found the tale only mildly entertaining and it never really made me feel desperate to continue reading. The world isn't given a solid grounding at the beginning and new elements are thrown in all the time without a framework - this makes them feel like deus ex machina, even if they aren't, and it would have felt more natural with some stronger set up of each plot device.

I wasn't convinced while reading this book that I was going to continue on to the sequels, but having finished it I think I'll give the next entry a go.