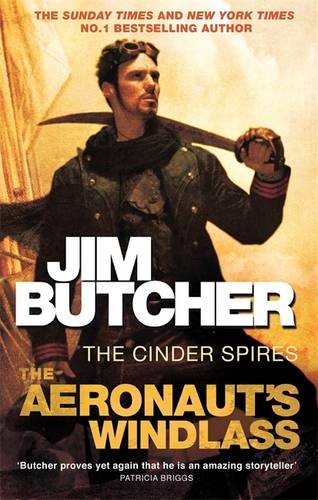 Captain Grimm commands the merchant ship, Predator. Fiercely loyal to Spire Albion, he has taken their side in the cold war with Spire Aurora, disrupting the enemy's shipping lines by attacking their cargo vessels. But when the Predator is severely damaged in combat, leaving captain and crew grounded, Grimm is offered a proposition from the Spirearch of Albion-to join a team of agents on a vital mission in exchange for fully restoring Predator to its fighting glory.

This is the first book in a new series by the author of The Dresden Files, set in a post-apocalyptic future where humanity has migrated to living in monumental 'spires' above the earth, separated by great distances of mist traversable only by great airship. We meet a group of youngsters preparing to do their bit for their home spire by signing up for the local Guard, as well as a veteran airship captain who spends his life flitting between the spires. And there are cats.

When I picked the book up I was expecting a sort of steampunk vibe, or at least some sort of fantasy, but if anything I'd classify it more as a proper science fiction novel, featuring some technology which to me is indistinguishable from magic. This made it unexpectedly delightful, and a new world which I enjoyed exploring along with the characters.

The variety of characters that Butcher has created are fantastic, creating a range of viewpoints from which to tell his story. There are some hilarious comic moments, some excellent intrigue and interesting revelations into which we barely scratch the surface, and a great plot for this opening story that creates a world that's begging to be explored. I'm really looking forward to continuing to read this series as it progresses.

And did I mention there are cats?