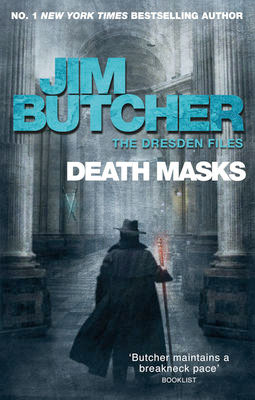 Harry Dresden should be happy that business is good - makes a change. But now he's getting more than he bargained for: a duel with the Red Court of Vampires' champion, who must kill Harry to end the war between vampires and wizards; professional hit men using Harry for target practice; the missing Shroud of Turin (less missing than expected) and a headless corpse the Chicago police need identifying. Not to mention the return of Harry's ex-girlfriend Susan, still struggling with her semi-vampiric nature. And who seems to have a new man. Some days, it just doesn't pay to get out of bed. No matter how much you're charging.

Death Masks is the fifth book in the Dresden Files series, which tells the story of Chicago’s only Wizard Private Investigator. This time he’s hired by a priest visiting the city from the Vatican to help recover a stolen artefact, which leads to an intriguing and rather complicated plot which I’m not sure I completely followed.

There is the usual mix of apical action and witty banter, and a stronger emotional undercurrent than perhaps we’ve seen before in the series, as events from previous books are followed up and some plot threads are seemingly tied up. At the same time, this book introduces a number of new threads, which look like they are going to spread through the series to come.

While I enjoyed reading this, possibly the most of the books so far, I did feel that it was leaning towards the more implausible end of the urban fantasy spectrum, particularly in some of the detail around the scenario in this book. Additionally, the introduction of a range of new enemies made for a lot of new information to absorb, and I don’t think I managed to digest everything that it had to offer.

Unlike the first few books, which could be described along the lines of ‘Dresden does Vampires’, ‘Dresden does Wereworlves’, etc., this story defies such classification, and I think that’s a good thing - it shows a little maturity of the series that it can start to do its own thing, and begin to build up some of the ongoing plot threads that I hope build into something fantastic int he books I have yet to read.