The Mystery of the Burnt Cottage 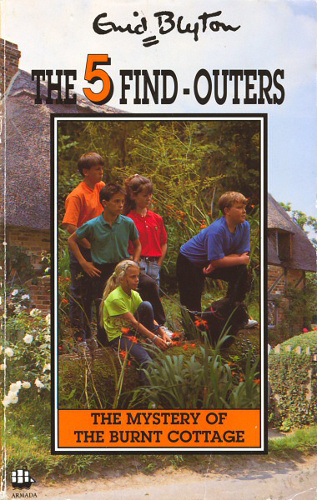 The Mystery of the Burnt Cottage is the first investigation for the Five Find-Outers and Dog, one of Enid Blyton's less-well-known teams of child detectives despite their fifteen adventures. This series was always my favourite in a childhood full of mystery series, and I've certainly enjoyed re-reading this story as an adult.

When Mr Hick's work cottage burns down, a group of local children, and a visiting child and dog, take on the challenge of finding out who did it, despite the protestations of the local police officer.

I found it quite tricky to get back into Blyton's style of writing at first - the language seems old-fashioned and the children speak in a posh dialect that sounds implausible to the modern ear. After a few chapters though I stopped noticing as I once again became gripped by their investigation.

As with many of Blyton's works, the boys get most of the adventure, with the girls relegated to stroking cats and walking dogs, though they do their fair share of clue finding. The plot surprised me with its strength - the quality of clues and suspects matching many adult crime writers and providing just enough for the reader to work things out with the characters - I have no doubt this series is what impressed a love of mystery stories on me as a child.