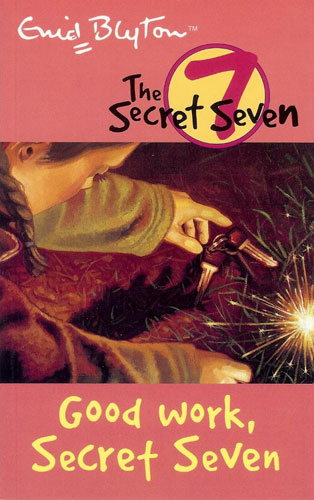 Peter and Janet are the only witnesses when a car is stolen. they saw the thieves, and now the whole of the Secret Seven are involved. But when they realise they're on the trail of a dangerous gang, the Seven don't feel so brave. Have they taken on too much this time?

I found it really interesting to return to this story in the Secret Seven series. As the children prepare for Bonfire Night, Peter and Janet are shocked as they witness a car theft, and set out to find the culprits.

As a child, I only had this as an audiobook, and even now some thirty-odd years later it still felt in places like I could hear the narrator’s voice floating somewhere in my memory.

However the narrative does seem to have changed since I was a child. My memory is of fireworks playing a more prominent role, however they seem to have been edited out of that to just an aside - presumably so as not to encourage younger readers of the 21st Century to do anything dangerous. Yet the cover image hasn’t been similarly edited, and so doesn’t depict any scene that’s in the story.

I’m not really sure what to think as a result. Probably one of the weaker stories that I’ve read in the series again so far.