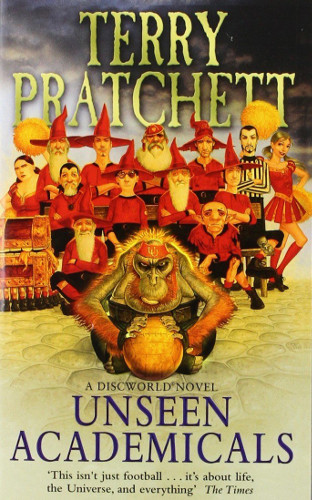 Football has come to the ancient city of Ankh-Morpork - not the old fashioned, grubby pushing and shoving, but the new, fast football with pointy hats for goalposts and balls that go gloing when you drop them. And now, the wizards of Unseen University must win a football match, without using magic, so they're in the mood for trying everything else. The prospect of the Big Match draws in a street urchin with a wonderful talent for kicking a tin can, a maker of jolly good pies, a dim but beautiful young woman, who might just turn out to be the greatest fashion model there has ever been, and the mysterious Mr Nutt.

Another fantastic outing from Pratchett as he draws his readers into a new set of characters in a familiar setting. The main cast of this book are a small group who work 'under the stairs' in the Unseen University, while the regulars take a back seat. The Archchancellor and Patrician team up to introduce organised foot-the-ball to Ankh-Morpork and replace the violent street version of the game.

I love the new characters and the ease with which Pratchett introduces them into his world as if they have always been there. The comedy is as on the ball as always; crazy ideas, catch-phrases and misinterpretations rule throughout, and the mirror held up to the real world shows a spot-on reflection of the real world of racism and sport.

There's absolutely nothing in this novel that requires prior knowledge of the series and so it would make an excellent drop in point for the new reader - there are some references that you won't even notice but the Discworld aficionado will giggle themselves silly at.

Pratchett has lost none of his genius, and that this is the thirty-seventh Discworld novel proves that he truly is a masterful writer. I look forward to many more.