The Mystery of Smugglers Cove 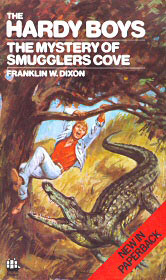 A painting is stolen, and the Hardy Boys are suspects. Determined to find the artwork, the young detectives fly to Florida, where they disguise themselves and join a group of sinister smugglers.

In a 1980s story with a title reminiscent of much earlier books in the Hardy Boys series, the brothers get to travel to Florida, investigating the theft of a valuable painting.

Unlike many of the books, this one focusses almost exclusively on the plot, with minimal mention of the characters’ lives outside that, to the extent of being one of the only books in which Chet doesn’t have a wild new hobby. This also has the side effect of making the narrative less problematic to a modern reader.

The plot however feels a bit messy - there seem to be three different things going on and they are all mashed together into one, similar to the two-plot situation in the previous novel, The Mummy Case, so maybe that will become a trend through the 80s novels to come.

That said, it was also more readable than some of the previous novels, and I had no problems digesting five chapters at a time, and the whole book over the course of a couple of days.