The Mystery of the Whale Tattoo 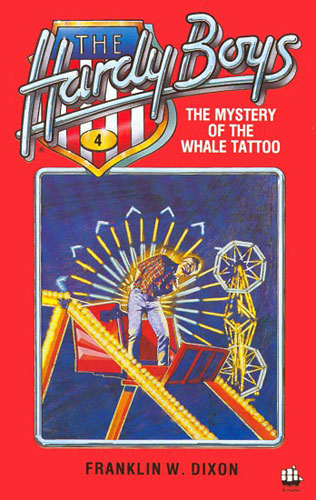 The riddle of a strange tattooed whale on the hand of a carnival clown leads the boys on a treasure hunt across the USA.

The forty-seventh Hardy Boys novel sees the brothers get involved in one of their father’s cases related to an ivory theft, while simultaneously and unconnectedly their friends go into the whale business.

This is something of a return to the norm for the series, which had been seemingly in an experimental phase in the previous two books. The plot follows the normal pattern and the boys use their unlimited aeroplane access to solve the mystery.

Unfortunately this book has chosen to focus on subject matter that I’m surprised wasn’t already a delicate area when it was published. Whale hunting is described in an entirely uncritical way, and Chet has become involved in what would now be considered at best a controversial hobby. This couples with the now seemingly ever-present classist attitudes of the main cast to make the book feel quite dated.

So a bit uncomfortable and a bit silly.