A Dance with Dragons (2: After the Feast) 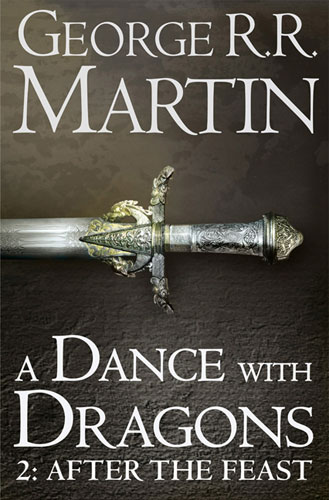 The future of the Seven Kingdoms hangs in the balance.

In King's Landing the Queen Regent, Cersei Lannister, awaits trial, abandoned by all those she trusted; while in the eastern city of Yunkai her brother Tyrion has been sold as a slave. From the Wall, having left his wife and the Red Priestess Melisandre under the protection of Jon Snow, Stannis Baratheon marches south to confront the Boltons at Winterfell. But beyond the Wall the wildling armies are massing for an assault.

On all sides bitter conflicts are reigniting, played out by a grand cast of outlaws and priests, soldiers and skinchangers, nobles and slaves. The tides of destiny will inevitably lead to the greatest dance of all.

The second half of the fifth book of A Song of Ice and Fire really does work as it's own book. Each chapter of the whole series really comes across as its own episode and they could easily be strung together in one long story or split between almost any one. Martin splits his novels at particularly shocking places though, and this follows that trend.

A reminder - this is the increasingly diverse story of a group of factions each trying to invade or defend a land mass from invasion, insurrection or supernatural attack. The characters who have survived this far are almost all ones that I enjoy spending time with, although because of the structure of the narrative at this point, there are some who go completely without mention.

One thing I did find with this volume though is that the chapters have become somewhat formulaic - or it's just that I've read enough now to recognise the formula. The chapter begins by updating us on a character's situation since the last 'episode' in which we saw them, then they make a plan for what to do next, attempt to execute it, and something goes horribly wrong. There's nothing intrinsically wrong with this structure, but the repetition meant that I started to expect it and try to predict the ending rather than just enjoy the ride.

Still a fantastic series though and I'm now desperately waiting for the next instalment - the first that I'll be able to read in hardback as soon as it's out, regardless of how long it is.