A Storm of Swords (1: Steel and Snow) 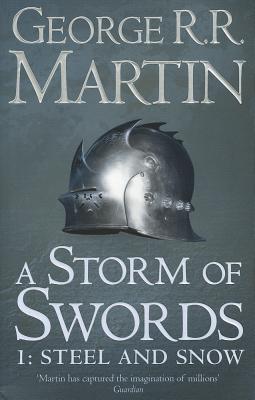 The Seven Kingdoms are divided by revolt and blood feud. In the northern wastes, a horde of hungry, savage people steeped in the dark magic of the wilderness is poised to invade the Kingdom of the North where Robb Stark wears his new-forged crown. And Robb's defences are ranged against the South, the land of the cunning and cruel Lannisters, who have his younger sisters in their power.

Throughout Westeros, the war for the Iron Throne rages more fiercely than ever, but if the Wall is breached, no king will live to claim it.

The third book in George R. R. Martin's Song of Ice and Fire series has been split into two volumes for the paperback release, and this is the first of those. I decided having finished it that a break might be in order before picking up the second half, so these are just my thoughts on this part, 'Steel and Snow'.

The book follows a large collection of characters in and around the land of Westeros, following a large battle that took place at the end of book two, and dealing with the fallout. Each chapter is presented aligned with a different character's point of view, and as such I found it hard to get excited about starting a new chapter knowing that any cliffhangers wouldn't be resolved for some time. On the other hand it was nice to see the name of the character at the beginning of the next chapter and be glad the story was coming back to them. I enjoyed spending time with almost all the characters this time, which is more than I've said in previous instalments.

It's difficult to comment on the overall plot having read only half of the real book, and no overarching plot has really emerged so far, but the individual instalments have all been captivating and have continued to make me love the characters I loved from the first two books and even enjoy more spending time with some of the others. The beginning perhaps felt a bit slow, and I had some difficulty remembering everything that had happened in book two, which I read only seven months ago, but the second half reignited my interest and I raced through it.

Although I've decided to leave a gap before reading the second volume, I'm looking forward to picking it up a lot and reuniting with some of the awesome characters Martin has managed to create.