A Dance with Dragons (1: Dreams and Dust) 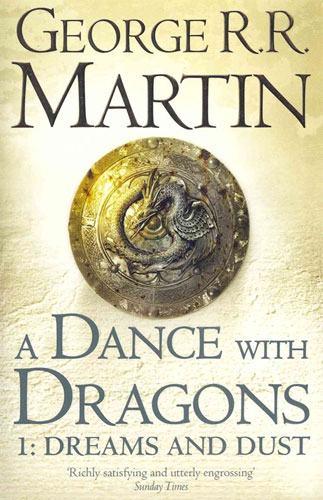 In the aftermath of a colossal battle, new threats are emerging from every direction.

Tyrion Lannister, having killed his father, and wrongfully accused of killing his nephew, King Joffrey, has escaped from King's Landing with a price on his head.

To the north lies the great Wall of ice and stone - a structure only as strong as those guarding it. Eddard Stark's bastard son Jon Snow has been elected 998th Lord Commander of the Night's Watch. But Jon has enemies both inside and beyond the Wall.

And in the east Daenerys Targaryen struggles to hold a city built on dreams and dust.

I’m reading the paperback editions of the A Song of Ice and Fire series, and so book five is split into two parts - as with the third book, I’ve decided to read each half separately to spread the load.

The series depicts a fantasy world - focussing on the island of Westeros - where a war has broken out amongst various houses over who should rule, distracting the people from necessary preparations for the coming winter. In this way, it provides an interesting allegory for a world where political point scoring is seen as more urgent than responding to legitimate threats to climate.

It’s hard to be specific about the plot and characters of this particular volume without plot-spoilers. This volume in particular focusses on this characters in the northern half of Westeros and overseas - the previous novel having focussed on what was happening simultaneously in the southern part of the continent. This makes for an interesting situation where we know more than the characters do, and so can read with a knowing grin as we predict where certain plot elements are leading. In a way though it’s frustrating - there was a lot happened in the fourth novel and very little has yet been followed up on.

Probably the best thing about Martin’s writing is the characters - there are such a wide range and each have truly believable traits. He’s a master of switching his readers feelings around, so that characters I was completely unsympathetic with early in the series have become some of my favourites, who elicit a groan of disappointment as their chapters come to an end. In fact I feel with this volume Martin has reached a peak, with there being no character I haven’t wanted to spent more time with.

Martin’s narrative is also brilliantly crafted. The structure of long chapters, each from a single point of view, rotating around the world, gives a really strong viewpoint in each scene. It allows each scene to show one important event, or character moment, and skip the narrative over sometimes quite long periods between scenes without the reader feeling anything has been missed.

Still a really great series that I’m thoroughly enjoying reading. I’m really looking forward to reading the second part of book five, even though I know I’ll then have to wait, possibly years, for anything to be resolved.