A Figure in Hiding 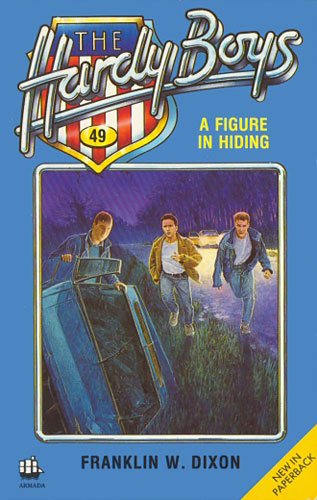 A blind peddler's warning and a glass eye plunge Frank and Joe Hardy into a baffling case.

The sixteenth novel in the original Hardy Boys series (in the 1965 rewrite edition) sees the brothers up against a mysterious glass eye which they discover when one of their acquaintances' boat goes for a test run. It features a number of the tropes of the stories that I've recognised over the course of my re-read so far, including experimental modes of transport, car chases, car crashes, gangs, mystery faces at windows, Chet having a weird new hobby, and so on.

While the first ten books feel comfortably as if they have had some effort to make them varied and interesting in different ways, since then the series has gone downhill, repeating similar situations and almost seeming to follow a formula rather than putting in a reasonable amount of imagination.

As such, it's becoming harder for the stories to grip my attention as I go on. Now admittedly this might be because I am not part of the target audience of young teens in the 1960s, but I think the change in my response since reading the earliest books again is to the change in quality of storytelling.

In this particular example the mystery is really wrapped up in a page of exposition right at the end rather than being uncovered as part of the drama, with the story feeling much more a thriller than a proper detective tale. Overall a fairly weak entry in the early original series and not one that I'd put on a must read list.