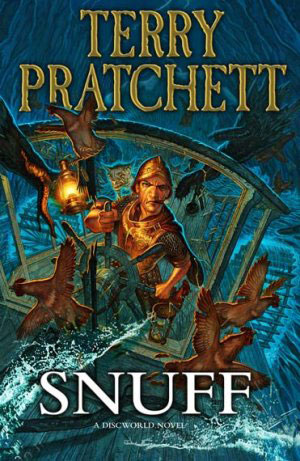 Commander Sam Vimes of the Ankh-Morpork City Watch is on holiday in the pleasant and innocent countryside, but not for him a mere body in the wardrobe. There are many, many bodies and an ancient crime more terrible than murder.

Discworld novel thirty-nine is surprisingly similar to a couple of the recent books in its focus, reminding me strongly of the themes from Thud! and Unseen Academicals. The story focusses on Commander Vimes, who is dragged away on holiday by his wife. Vimes' opinion though is that a policeman is never on holiday, and it isn't long before a crime comes to find him.

I find it hard to be objective when reviewing Terry Pratchett's novels, possibly because of how much I respect the author and his continued endeavours to write despite whatever life throws at him, however I do feel this is something of an average Discworld tale. It has all the classic hallmarks - imaginative characters, real world message, genre parody, comic lines - but doesn't feel like it has a unique identity or purpose running through.

The subject matter, although framed around a police investigation, is racism - as I've mentioned above, a theme that runs through quite a number of Pratchett's stories - and I wonder whether this suggests a lack of new places for the Disc's adventures to explore. However as always the subject is more complicated than one word can make it, and there are a number of philosophical questions that poke through the text.

I have enjoyed this new adventure and I hope there will be many more, but I am worried that this tale begins to feel like it might be moving the world toward a place where its story might end. I think our world will be much deprived without it.