The Mystery of the Whispering Mummy 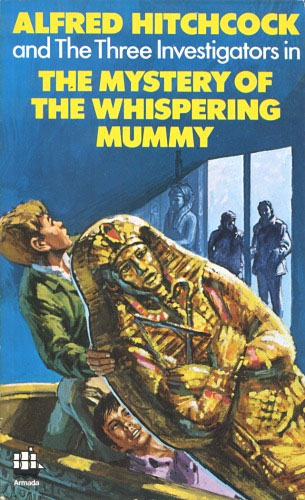 Jupe, Pete and Bob are the Three Investigators - a team dedicated to cracking the mysteries no-one else can solve. When Jupiter Jones hears about Professor Freeman's weird Egyptian relic, he knows it must be a hoax. A 3000-year-old corpse can't whisper, or can it?

The third investigation by the Three Investigators sees them called in by another friend of Alfred Hitchcock to investigate a talking artefact. It's the first time they actually do some investigating properly and introduces more of the features that become recurring elements throughout the series.

The plot is good, and the several attempts that the team make at solutions flow well and demonstrate good deduction and reasoning. The guest characters are plausible, though some of the dialogue is unnatural in a way that feels deliberately obfuscating.

Another good adventure - better than the previous story - but slightly dated now.