The Secret of Skeleton Island 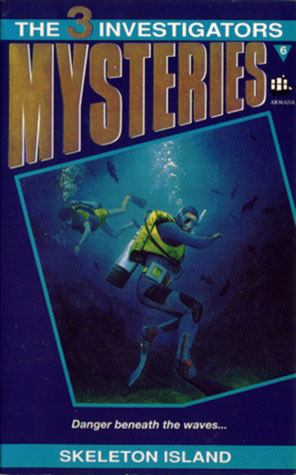 Skeleton Island, an eerie spot inhabited only by pirates' bones and a young girl's ghost. A movie company has chosen the island as the perfect place to make a scary film, but mysterious events are disrupting the crew. They call in the Three Investigators. But just as the boys arrive on the island, so does the ghost.

In a change from their adventures up to this point, the Three Investigators are sent away to investigate who is stealing things from a movie location at the seaside. The location gives a sense of scale that the regular novels have lacked, but it also means that we miss out on the usual trappings of the series - the Rolls Royce car, the secret base and its many entrances, and the regular guest cast.

There's a little casual racism that feels out of place for a modern reader, but it is challenged within the narrative and actually feels quite forward-thinking compared to some books aimed at an adult readership written in the 1960s.

This entry in the series feels shorter than some of the others, and the investigation doesn't seem to flow as well, though the story does work and the reader is able to follow and work out what's going on along with the characters, which is always the mark of a good mystery story.