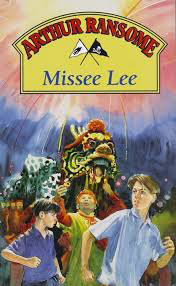 The Swallows and Amazons have finally met a real pirate - the tiny, pistol-carrying Missee Lee, who has rescued them after their shipwrick off the coast of China. The only touble is she wants to keep them... forever.

I said in my review of Secret Water, an earlier book in the Swallows and Amazons series, that it was probably the weakest in the series, but now I'm not so sure. Missee Lee is written as a story that the children have made up about themselves visiting the far east and being captured by pirates. This structure, though only made explicit in a single line introduction, is similar to that of Peter Duck, yet I felt this story was less substantial.

I remember reading this as a child and not finding it the most enjoyable entry in the series, and looking back I can understand why. A large proportion of the middle of the book is spent on learning Latin - far more than seems necessary - which is quite unapproachable for a modern-day reader not schooled in this ancient language. Perhaps to a mid-twentieth century audience, for whom the book was written, these parts may have come across as familiar in-jokes, but today they are just incomprehensible.

There are also a number of words which would be considered politically incorrect today, and the way that all the Chinese characters speak could easily be taken as racism if imitated by children reading the book today.

There is remarkably little sailing for the series in this book, and it stands out to me as a bit of an oddity, not quite fitting in as Peter Duck did. I don't think I'd recommend it to anyone unless they wanted to complete the series.