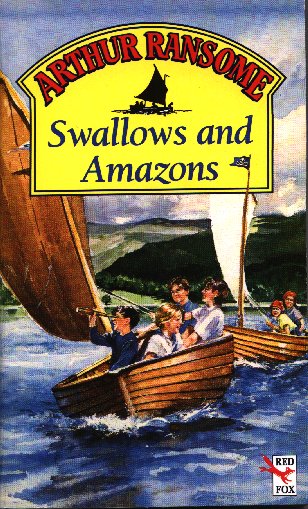 To John, Susan, Titty and Roger, simply being allowed to use the boat Swallow, to go camping on the island is adventure enough. But they soon find themselves under attack from the Amazon pirates, Nancy and Peggy. Thus begins a summer of battles, alliances, exploration and discovery.

Swallows and Amazons is a classic children's novel set in the Lake District, where it tells the story of the holidaying Walker family, who sail the lake and set up camp on its island, where they meet the local Amazon pirates. It's been about fifteen years since I last read this and it has lost none of it's charm.

Ransome's style is casual and approachable, ideally suited for children but not to the extreme of many of today's books which become unintelligible to the adult reader. There are a couple of instances where he breaks the fourth wall which breaks the flow a touch but this can be forgiven. The chapters are a consistent length, splitting the narrative into bite size chunks which would make the book an ideal bedtime story. My only qualm is the amount of unexplained technical language around the sailing which I certainly didn't understand as a child and remain unsure over now - if reading to a child it may be worth looking up some of this in advance so that an explanation can be offered.

It amazes me actually how closely the film (which I must have seen dozens of times when I was younger) follows the narrative of the book, to the extent that even now I could picture the actors and on-screen depictions throughout. Slightly annoyingly the theme music also returned to me as I read and has been playing around on loop in my head for several days!

Although now over 80 years old, this book has survived the test of time and despite the lack of what we would think of as technology, it could easily be set today (though I suppose lake traffic would be busier - ironically due to tourism being boosted by this very book) and is approachable for the modern reader. I've really enjoyed this re-read and look forward to doing the same with the rest of the series.