The Picts and the Martyrs 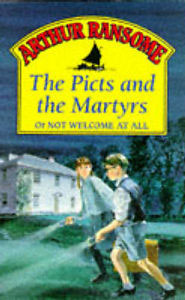 The dreaded Great Aunt has invited herself to stay with Nancy and Peggy just as their friends Dick and Dorothea arrive for the Summer holiday. Nancy and Peggy have to become Martyrs, wearing dresses and reading poetry (but breaking out at night), while Dick and Dorothea become Picts, secret inhabitants of the country who must never let themselves be seen. It's a desperate gamble to keep everyone out of trouble - but can it possibly work against the eagle eyes of the fearsome Great Aunt?

The eleventh of Arthur Ransome's Swallows and Amazons books is the only one of the series to feature the Amazons without the Swallows, taking place early in the summer holidays. Dick and Dorothea are visiting the Amazon pirates to take delivery of a boat of their own, but an unscheduled visit from the Amazons' great-aunt disrupts their plans.

It's a good new situation for the characters to find themselves in, and the use of the D's as main characters allows Ransome to write about them learning at the same time as his readers - by showing rather than telling, which is what would have to happen if he used his more experienced characters.

Although compared to some of the earlier adventures, the plot seems quite tame, it's still an exciting tale of children left to their own devices that is still approachable for modern children. It's probably one of the best of the later books in the series, and makes a number of references back to earlier adventures.

Another good story that I've enjoyed revisiting. Ransome's tales deserve to remain well-loved children's classics for many years to come.