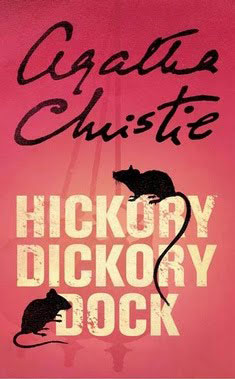 An outbreak of kleptomania at a student hostel was not normally the sort of crime that aroused Hercule Poirot's interest. But when he saw the list of stolen and vandalized items - including a stethoscope, some old flannel trousers, a box of chocolates, a slashed rucksack and a diamond ring found in a bowl of soup - he congratulated the warden, Mrs Hubbard, on a 'unique and beautiful problem'.

Hickory Dickory Dock is a fairly average Poirot novel, in which the famous detective, bored, goes to investigate a small mystery bewitching his secretary's sister, which soon escalates into murder.

The cast is so huge that I almost decided to go back to the beginning after a few chapters and write out a diagram of the relationships between them so that I could keep up. There's more diversity than usual, with suspects from around the world. This creates a slightly odd balance in the narrative between what reads like unchallenged casual racism of the time, and what appears to be a strong criticism of racist views. Overall this comes across as more of a focus than the actual plot, but without any real focus of moral at the end.

Unlike most of Christie's novels, I didn't feel when I got to the end that I'd been given sufficient information throughout to solve the mystery myself, it was more a case of being presented with solutions wholesale at the end. There was one point too that I couldn't even see how it fitted in with the plot.

Overall, I didn't feel it was one of the great Christie works, and it was rather disappointing. Perhaps one best left just for the completionists.