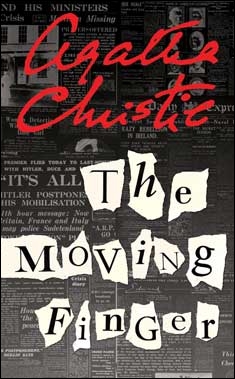 Lymstock is a town with more than its share of shameful secrets - a town where even a sudden outbreak of anonymous hate-mail causes only a minor stir.

But all that changes when one of the recipients commits suicide, but Miss Marple questions the coroner's verdict. Soon nobody is sure of anyone - as secrets stop being shameful and start becoming deadly.

This is the third Miss Marple novel penned by Christie, and it almost seems like it has been tweaked deliberately to include her.

The narrator is a former pilot who is sent to the country to recover after a crash, and is thrown into the middle of the mysterious events, and, this being a Christie novel, the murder.

Miss Marple doesn't arrive until fairly close to the end, and it seems as if she's been dropped in to solve the crime... as if Christie has suddenly decided that none of her characters are bright enough to figure it out. I would have rathered the narrator was able to solve it, as he is by far the real main character of the story.

Overall, this is another good novel - not an extra special one, and if it hadn't been labeled Marple on the spine I probably wouldn't have bought it. None of Miss Marple's thought processes are shown, and it is lacking for that.