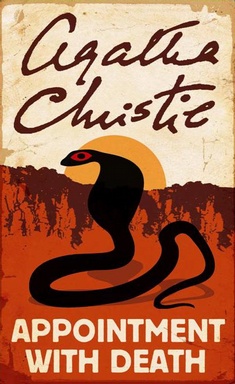 Among the towering red cliffs of Petra, like some monstrous swollen Buddha, sat the corpse of Mrs Boynton. A tiny puncture mark on her wrist was the only sign of the fatal injection that had killed her. With only 24 hours available to solve the mystery, Hercule Poirot recalled a chance remark he'd overheard back in Jerusalem: 'You see, don't you, that she's got to be killed?' Mrs Boynton was, indeed, the most detestable woman he'd ever met!

Poirot is on holiday in Egypt (again/still) and once again murder catches him up. Travelling with him are an American family led by a domineering old woman who keeps the rest of the group under her thumbs, and when she's murdered, suspicion falls on almost everyone.

Once again Christie has produced an amusing and human tale - one that really makes you sympathise with all the suspects, spending a lot of time setting the situation up and developing the group more than in many of her novels. Poirot himself only has a couple of cameos in the first half, and is brought in later to investigate.

The investigation however falls back into what has become Poirot's typical style - interviewing each of the suspects and witnesses in turn and then plucking the solution seemingly out of thin air. I didn't find this as interesting as the first half, and perhaps that's why I completely failed to spot the right clues and had no idea who was going to turn out guilty.

Overall, another good quick read - the set-up is one of the best of the series that I've read, but the payoff weakened it.