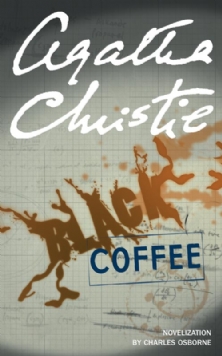 Sir Claud Amory's revolutionary new formula for a powerful explosive is stolen. Locking his house-guests in the library, Sir Claud switches off the lights to allow the thief to replace the formula, no questions asked. When the lights come on, he is dead, and Hercule Poirot and Captain Hastings have to unravel a tangle of family feuds, old flames and suspicious foreigners to find the killer and prevent a global catastrophe.

This is an interesting read - a novelization of a Christie play where Poirot is called to investigate a potential case of espionage but which turns quickly to a murder situation. Osborne makes a good job of emulating Christie's style, and the personalities of Poirot and Hastings are spot on.

It does however read like an adaptation, Osborne has taken no liberties at all it seems, so almost the entire book takes place in one room. The actions are described just like in a script, obviously necessary for the reader to see the clues, but it could have been better disguised.

It's very short as a novel, even for a Christie, and I read through it in a couple of hours at most. As such, it doesn't give the reader a lot of time to consider what has happened and try to solve the mystery themselves. I imagine on the stage it has an interval which serves this purpose. There are several rather distracting references to Poirot's other cases - presumably a stage tactic to sell books - which seem out of place, especially as one of them (afaik) had not been published when this play was written, and so I have not yet read it.

Overall, it was an okay read, but nothing special. I could easily visualise it on the stage, however, and think it was probably better suited to its original medium.