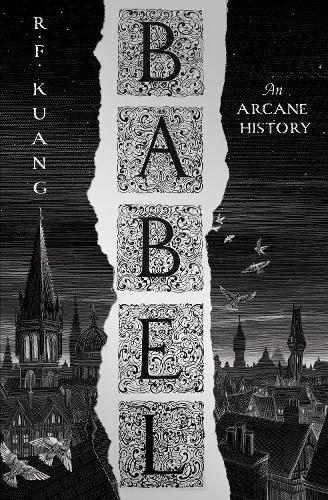 Oxford, 1836. The city of dreaming spires. It is the centre of all knowledge and progress in the world. And at its centre is Babel, the Royal Institute of Translation. The tower from which all the power of the Empire flows.

Orphaned in Canton and brought to England by a mysterious guardian, Babel seemed like paradise to Robin Swift. Until it became a prison. But can a student stand against an empire?

I feel under qualified to review this book in every possible way.

It’s a story of a young man, unexpectedly transported away from everything he knows, to be educated in languages and magic by a British professor with mysterious motives.

But it’s also the story of an oppressive regime, applying systematic racism despite relying entirely on the subjugated people to enforce it.

It’s a story of being out of place, of betrayal, of desire, of rebellion.

Kuang is a genius, and has managed to construct a story and characters who are compelling, engaging, who you desperately want to spend time with, and who you empathise with so much. She paints a picture of a world which despite the fantasy elements is so clearly our own, and points out so many flaws that we have.

And she does it with technical brilliance - her use of language, humour, extensive footnotes that just add more and more and are almost Pratchett-like in what they bring.

This should be the book that we all remember in 50 years as the mirror that was held up to society, and society saw itself and wept.