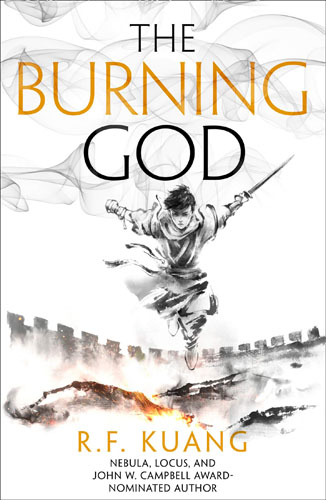 After saving her nation of Nikan from foreign invaders and battling the evil Empress Su Daji in a brutal civil war, Fang Runin was betrayed by allies and left for dead. Despite her losses, Rin hasn’t given up on those for whom she has sacrificed so much – the people of the southern provinces and especially Tikany, the village that is her home. Returning to her roots, Rin meets difficult challenges – and unexpected opportunities. While her new allies in the Southern Coalition leadership are sly and untrustworthy, Rin quickly realizes that the real power in Nikan lies with the millions of common people who thirst for vengeance and revere her as a goddess of salvation. Backed by the masses and her Southern Army, Rin will use every weapon to defeat the Dragon Republic, the colonizing Hesperians, and all who threaten the shamanic arts and their practitioners. As her power and influence grows, will she be strong enough to resist the Phoenix’s voice, urging her to burn the world and everything in it?

The third book of the Poppy War trilogy got off to a slower start for me. I found it hard to get back into the storyline, I think because it’s taken a darker turn and my ability to sympathise with the characters has reduced as a result.

My attention definitely picked up later on though, and I charged through the second half. Probably too fast, because I think I’m doing so I messed up my perception of time passing in the story. Having said that though, my memory is of long parts of the narrative covering relatively inconsequential events, and then major events happening very abruptly.

For me then, probably the weakest of the trilogy, though it does manage to deliver a satisfying ending that, unlike other fantasy trilogies, felt like it left me at exactly the right point - without feeling like I needed a bit more time with the characters or to see how things pan out following the climax.

I’m glad I picked up this trilogy after seeing the author win the Astounding Award in 2020, and I am certainly planning to pick up her future works.